Easter and the Harfield Village Carnival is here again!  What can neuroscience tell us about the traditions and rituals of groups of people coming together to celebrate?

The Easter story is perhaps the most important festival in the Christian calendar and celebrates the metaphor behind Jesus’s resurrection.  It celebrates those who loved him after his death. The story also involves the Supper at Emmaus – where Jesus appeared as an apparition during what is now Easter Sunday.  As the group sat down to enjoy the feast Jesus was not at first recognised by two of his disciples and the Innkeeper.  Soon into their supper however, with surprise and joy they realised whom this temporary visitor really was! Throughout the Easter story, while tragedy is of course central, there is also a lot of joy and remembrance of love, with people feasting together on good food after a period of abstinence (Lent).  Many religions follow similar practices – fasting, feasting and being together with friends, family and loved ones.  We are lucky in Harfield Village to live together in harmony with many people who hold different religious beliefs but who enjoy sharing that universal human joy of celebrating together. What can neuroscience tell us about the very human behaviour of feasting and celebrating together?

Neurotheology – or spiritual neuroscience – attempts to explain religious behaviour from a brain-based perspective.  Most famously, during the 1980s Michael Persinger stimulated the temporal lobes of human subjects with a weak magnetic field using an apparatus known as the “God helmet”.  Persinger demonstrated that many of his subjects claimed to experience a “sensed presence” during stimulation.  However, subsequent studies found it difficult to replicate the findings that magnetic stimulation to the brain could evoke the personal feelings of the sense of a higher presence.  Rather, the collective personality characteristics of groups of people most likely contribute to suggestibility and religious experience.  Nevertheless, famous neuroscientists such as Vilayanur S. Ramachandran firmly believe that our religious beliefs are not formed from outside forces – but rather from within ourselves.

Having our individual, subjective experiences verified by collective suggestion can be very powerful and self-affirming.  As such, neuroscientists suggest that this collective consciousness can hold us together and help to transfer memes – or ideas – about normality within groups.  The Harfield Village Carnival may not be a religious gathering per se – but the festival helps to solidify a sense of collective community and image about what it means to be a Harfielder.  Inviting outsiders from other Cape Town suburbs to join in our celebrations increases a sense of collective spirit.  The carnival – in common with most religious festivities – rewards our coming together with eating, drinking and making merry; all pastimes that help to reduce stress, increase dopamine and the bonding brain hormone oxytocin.  Is it any wonder then, that most religions – including Christianity at Easter – use food and drink and good company as focal points to reinforce beliefs?  Classical and operant conditioning – learning processes – involve the release of dopamine in the middle part of the brain (the basal ganglia), and enable us to associate our coming together to celebrate with pleasure.  And in the same way that Easter Eggs are a powerful reminder to us to celebrate an aspect of the Christian calendar, so too is the image of Lew Norgarb zipping around on his tuck-tuck during the wonderful Harfield Village Carnival! 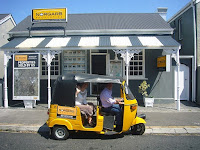 So have a wonderful time during this year’s festivities Harfielders, whatever religion you follow, and make sure to enjoy the feelings our brains allow us to have when sharing our celebrations!