In today’s unequal, materialistic society where poverty is rife, psychopaths are all around us!  They don’t have to be violent, criminally-minded types (although they often are!) but can be fully-functioning, self-made individuals. What then, is a modern-day psychopath, and how do their brains differ from the ‘norm’? 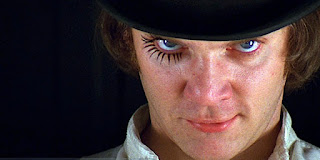 We probably all have a psychopath or two in our midst (think of a colleague, a friend, or even a spouse); we might even be one ourselves, or at least have elements of psychopathy in our character! Commonly, psychopaths are men – as psychopathic traits are linked to testosterone levels and aggression – but they can also be found in women.  Should we be afraid of a psychopath?  Or can we learn from the potential wisdom of a ‘functioning’ psychopath that has enabled their traits to survive, thrive and even shape echelons of society? What are the traits of a psychopath, and where are they based in the brain?  These questions can be answered by modern neuroscience and psychological theories of personality.  But before we delve into these dark questions, keep in mind some of the most infamous psychopaths in history: Niccolo Machiavelli, Adolf Hitler, Hannibal Lecter, Jeffrey Dahmer, Joseph Mengele and perhaps Donald Trump. Think also of the Dionysian, reward-seeking brokers who made huge profits by selling unsustainable, high-interest loans to vulnerable first-time buyers, contributing to America’s sub-prime housing market crash and the global financial crisis in 2008.  These folks have in common an element of charm, persuasion, exploiting vulnerability, aggressive determination, and in some, a killer instinct.

Should we be afraid of a psychopath?

Psychopathic behaviour is often referred to as Machiavellian, named after the Italian politician, Niccolo Machiavelli, who lived during the Renaissance period from 1469 to 1527. Machiavelli appeared narcissistic – concerned only with his own interests – particularly in terms of remaining in power.  In his book, The Prince, he documented that immoral behavior can often – at least in politics – be justified by the end goal.  The book was heavily criticized because it appeared to provide recommendations for tyrants to stay in power no matter what the cost to individuals.  Those who follow Machiavellian principles will often hide behind convincing charm while exercising manipulation, deception and exploitation of others to achieve personal goals. The good news is that while a high percentage of killers appear to be psychopaths, not all psychopaths are killers – and in some professions, it might even be beneficial to be a ‘functioning’ psychopath.  Yet, it pays to remember the old adage: if it appears too good to be true, it usually is!  Under these circumstances, it is best to be cautious and vigilant.  And remember the song about not smiling at a crocodile – that you can’t get friendly with a crocodile, because he’s imagining how well you’ll fit within his skin!

Should we learn from the potential wisdom of a psychopath that has enabled their traits to survive, thrive and perhaps even shape today’s society? 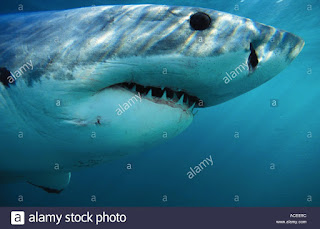 For many reasons, psychopathic tendencies continue to remain and thrive in certain echelons of our modern society; the tenacity of a ‘good’ psychopath enables growth and the achievement of beneficial goals. Think of a firefighter, a soldier, a surgeon, a doctor, a lawyer – all professionals with strong emotion control that tend to score high on questionnaires such as the Psychopathic Personality Inventory (PPI). However, while functioning psychopaths are thinking of the bigger picture, in contrast, dangerous psychopaths are usually in gratification pursuit mode, able to put the blinkers on so as not to react emotionally and be distracted from their self-interested goals.  Both functioning and dangerous psychopaths experience less fear than the general population, and as such will repeatedly take risks to obtain hero status (functioning psychopath) or self-gratification at the expense of others (dangerous psychopath). Like a Great White Shark with dead, black eyes searching for its prey, a psychopath will relentlessly pursue a goal. Interestingly, recent neuroscience suggests that psychopaths do not lack empathy, but rather can expertly read a person’s feelings from overt bodily signals and little give-away signs (a nervous twitch in the face, a vulnerable way of walking) that is stored in memory for future exploitation. That psychopathy has maintained a stranglehold on the human character is perhaps due to the relentless pursuit of self-sustaining reward, and the development of brain circuits that support excellent memory and emotion control.

What are psychopathic traits and where are they based in the brain? 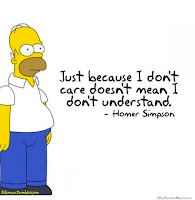 Psychopathy is relatively rare, and this may be due to the fact that collectively, members of society remember – and punish by example – previous bad behaviour. Only between 0.5 and 1.5 % of the general population exhibit high psychopathic scores; this figure rises to approximately 25% in any given prison population of ‘non functioning’ individuals.  Alarmingly, psychopathic traits are also found in modern-day business leaders at the rate of about 1 in 5, suggesting that some professional fields may thrive – and are shaped by – the guidance of psychopaths.  Empathy – an ability to understand another person’s feelings – is present in a psychopath, but they just don’t care very much.  Ruthlessly focussed self-obsession is key, coinciding with a lack of cross-talk between the prefrontal cortex (shown in blue with the red arrow of ‘Jim’s’ brain) and the emotional centres of the brain. Some neuroscientists have actually trucked an MRI scanner into notorious prisons in America to scan the brains of the most extreme psychopaths. The findings? Extreme psychopaths have reduced grey matter volume in the prefrontal cortex (the forehead) and in the temporal poles (above the ears). In terms of brain activation, when thinking about their own pain, psychopaths activate typical emotional and sensory regions, including the insula, amygdala and somatosensory cortex. But when viewing pain inflicted on others, these regions are quiet, but their reward centres light up – suggesting that psychopaths have an innate sense of Schadenfreude – or getting pleasure from the displeasure of others. 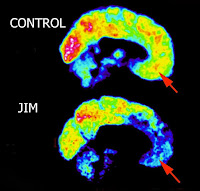 The take-home message?  Don’t take a psychopath home with you!