Organic composting with Zero to Landfill
Food waste going into landfills releases methane gas, a powerful contributor to global warming. Composting food waste and organic matter is a much better option  Melanie Jones from Zero to Landfill (ZTL) will be joining us at the February garden party to discuss setting up a food waste composting collection point in Harfield Parks so that residents of Harfield Village can bring their food waste to be composted for R1/kg. She may also accept garden waste depending on volume.

Once ZTL can prove to the CIty that food waste separation and composting is easy and people are interested in doing it, they hope the City will start offering the service to all residents, but they will need to be shown how it is done.

ZTL will donate compost to Harfield Parks made from food waste so people can see there is a benefit to the parks and that food waste can be made into quality compost. The Organics Recycling Association of South Africa is also supporting this initiative so there will hopefully be more of these drop off spots around Cape Town.

Eco-bricks
We would like residents to participate in making eco-bricks and creating projects to use them. An enormous amount of plastic waste can be packed into a single bottle. This keeps the waste out of the environment and addresses the problem of all those tiny bits of plastic that are never recycled but choke and kill so many animals. A demonstration of how to make eco-bricks will be given at the gardening party. There is also a local eco-brick initiative in Harfield – here’s their Facebook page. 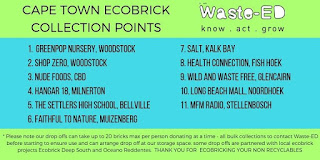 Kenilworth Station Upgrade
FOHP stalwart Gail Brown has been the driving force behind the garden along the railway (Worcester Road and First Avenue). The Kenilworth end of the area is always the hardest to keep maintained and poor support from the businesses around the parking area on Second Avenue has meant that any initiative struggles to be sustainable. A few years ago the parking area was redesigned and refurbished to accommodate more parking spaces as well as islands with trees. However the work done was shoddy and never fully completed and now the Councillor for Ward 58, Sharon Cottle has informed us that the area will be redone again. We hope that this will not be another waste of ratepayers money. Maintenance is key to the success of the refurbishments. Any residents who live in the area who are interested in being involved please contact us or send your comments to the councillor, Sharon.Cottle@capetown.gov.za.

Litter in the Parks
Although the FOHP are very concerned about the littering in our parks, the dustbins are in fact under the care of City Parks. Therefore full dustbins should always first be reported on the City Service requests page on the City of Cape Town website. It is very easy to use. This instantly creates a service request which is acted upon by the relevant City department.

Whether there should be more dustbins in the parks is a matter open for discussion. Last year the dustbin in Hampstead Park at the children’s play area was removed as the dustbin was creating a health issue being constantly filled by street people sorting through bags.

The removal of that specific bin has been very successful as the children no longer play around disgusting messes. However, the problem of street people sorting through dustbin bags has not been solved and the misuse of the dustbins for household rubbish is a big problem. Placing more bins in the parks does not solve this problem. We urge all residents to recycle their household rubbish and remove the cause of the litter at source.

Please report any person seen littering or drinking alcohol in the parks. This can also be done on the City web page. Please take photos of the litter issues and send them to harfield.parks@gmail.com as we are building a photo record of by-law violations in the parks.

FOHP is asking for City to address the problem of people living on the streets, to provide facilities for people who are using public open spaces, to provide cigarette butt bins, to enforce the law prohibiting drinking alcohol in public spaces, littering and sleeping in the parks. Ultimately it does depend on the residents using the parks and being proactive in addressing any problems, be it picking up litter, reporting problems or gently reminding people that public spaces are there to be used with respect.