REJECTION ABOUT THE XENOPHOBIC BORDER-BUILDING ERA

What can the neuroscience of abandonment and rejection tell us about the current Brexit, Trump, Xenophobic border-building era we currently find ourselves in?

We are living through interesting, uncertain times, ignited by the blurring of global borders that began over two decades ago, with the free intellectual movement caused by the creation of the internet. The UK’s reaction to the blurring of global borders appears in the country’s intent to leave the European Union (EU).  The USA’s reaction is illustrated by the election of President Donald Trump and his building of a wall demarcating the border between the USA and Mexico. The reaction in France is demonstrated by the Yellow-Shirts who are rioting and running rampant on the streets of Paris. And not so long ago, South Africa’s response to globalisation was shown in Xenophobic violence against people seeking work.  It seems that the whole world is reacting negatively to globalisation, divided between those who wish to abandon it in favour of demarcation lines between “us” and “them”; and those who do not reject the idea of a mixed, multicultural global community. 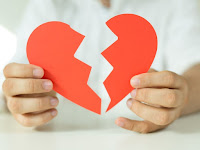 All this abandonment and rejection in Europe and the United States is similar to some of the contemporary decolonialism practices in South Africa. While historical Colonialists such as Cecil Rhodes certainly fueled the awful atrocities of white domination and Apartheid that must be rectified, South Africa should perhaps learn from the impact of secularisation across the world.  South Africans could buck the trend by welcoming globalisation that merges with Africanisation. The impact on the mind of forging real barriers between people can only lead to deepening thought processes that objectify the rejected “other” as non-human, or at the very least “not like me”, whether it be EU/Non-EU, Mexicans/Americans, Black/White or Civilians/Gangsters.  With this increasing secularisation in mind, let’s take a brief look at some of the neuroscience research explaining the brain processes underlying abandonment and rejection, and how we might cope and improve our futures during this uncertain time. 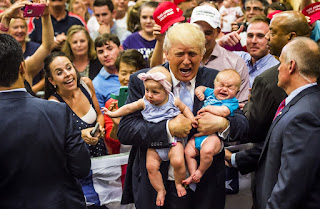 In attachment theory – a psychological concept about the bonds between a child and its caregiver – ideas form in childhood about abandonment and rejection that stay in our minds for life.  Attachment ideas inform how we interact with the people and objects in our world.  Most of us are securely attached, which means that as a child, when a parent or guardian left the room, or when a stranger appeared, we did not get upset or seek solace in the stranger.  Instead, we were happy in our own skin, with a solid sense of identity and belief that there are no real threats or dangers, while waiting for our caregiver to return.  However, those who experience early life deprivation (losing something you once had), or worse, privation (never having something that other people have), can lead to a sense of rupture that needs to be repaired.  How well a rupture can be repaired determines how mentally healthy a person will be, and can take a lifetime to achieve.  The UK once had a positive relationship with the EU, the USA once traded without constraints with Mexico and other foreigners, white and black people at the end of Apartheid began to heal those ruptures. But at the beginning of 2019, the world is faced with more deprivations than ever, and the groups on the other side who were once us, no longer look like us. 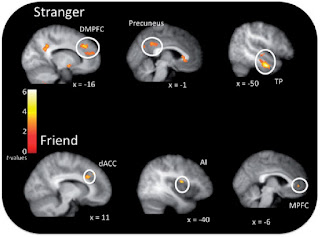 Neuroscience tells us that our brains examine the value of our world and the people and objects in it using the prefrontal cortex – the area of the brain underneath the forehead.  The orbitofrontal cortex determines whether we would like to engage, or whether we want to withdraw.  Deep within our brains the dopamine system fuels our rewarding sensations of pleasure – activated when we are in the presence of someone we love, or when engaging in an activity we like or want.  Pain interacts with the reward circuitry too.  Interestingly, if someone with whom you identify displays pain, whether it be actual or social pain, your brain will mirror their experience – you will empathise with their pain.  However, if –as shown in a recent fMRI study conducted by Dr Melike Fourie and colleagues at the Universities of Stellenbosch and Cape Town – you see a person in pain with whom you do not identify, in other words, from the out-group, you may not feel any pain at all, and a very different brain network will become active and may even make you feel disgust for the other. 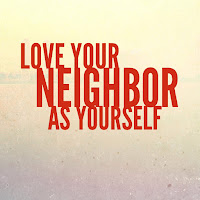 The ability to empathise – and the brain processes underlying it – are not born but made.  We learn  to emphathise by regularly keeping in contact with people. Regular social contact breaks down the barriers between “us” and “them”.  However, abandonment and rejection may strengthen the boundaries.  It is interesting to consider that the development and widespread use of the internet, excessive gaming and social media over the last two decades has reduced our face-to-face, real-life interaction with people.  Perhaps the downside to increased globalisation and widespread internet use has strengthened those brain processes that prevent us from emphathising.  As such, Brexit, Trump, racism, and anti-migrant sentiment, very modern maladies, might well be manifestations showing us that we need to get out more, to stop staring down at our cell phones.  We need to make doors in those barriers, and start getting to know our neighbours again!